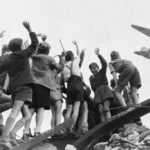 FPI / January 25, 2019 By John J. Metzler UNITED NATIONS — Responding to the Berlin Blockade, the communist coup in Czechoslovakia, and the looming threat from the Soviet Union, the U.S. and Western European states formed the North Atlantic Treaty Organization (NATO). On 4 April 1949, the foreign Ministers of twelve countries including the […]
Sign in below or Subscribe Now to see full content.
Login