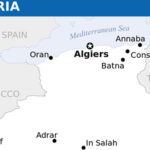 FPI / January 25, 2019 By John J. Metzler UNITED NATIONS — For nearly two months, large popular demonstrations have rocked Algeria protesting the candidacy of incumbent President Abdelaziz Bouteflika who planned to run for a fifth five-year term in national elections. The protests evoked the so-called Arab Spring in which demonstrations and later armed […]
Sign in below or Subscribe Now to see full content.
Login