UNITED NATIONS — From the appalling murders of 300 Sri Lankan Christians celebrating Easter, to the killings of Coptic Egyptians, Syrian Catholics, and Nigerian faithful, the grisly wave of anti-Christian violence worldwide is rising.

Add the formal state repression of Christianity in places like China, North Korea and Pakistan and one sees a clear and unmistakable pattern of modern day persecution.

Now a jarringly candid report commissioned by British Foreign Secretary Jeremy Hunt, discovers, “Persecution on grounds of religious faith is a global phenomenon that is growing in scale and intensity.” 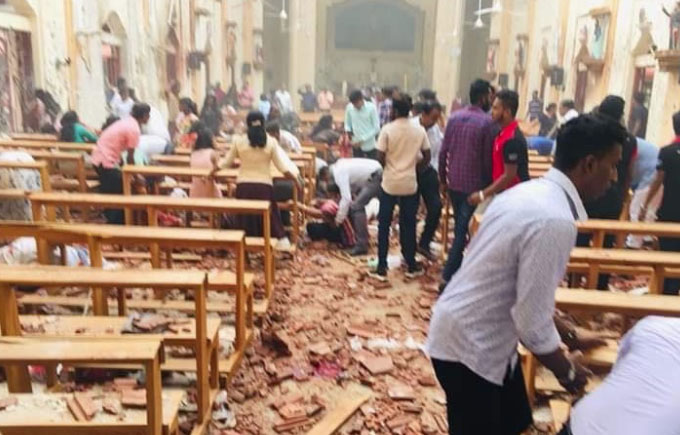 Aftermath of the Easter bombing that targeted and killed Christians in Sri Lanka. / GoFundMe

The Report compiled by the Anglican Bishop of Truro, the Right Reverend Philip Mounstephen, states, “Evidence shows not only the geographic spread of anti-Christian persecution, but also its increasing severity. In some regions, the level and nature of persecution is arguably coming close to meeting the international definition of genocide.”

Clearly it would be unpardonably arrogant of me not to cite wider religious persecution on the rise globally; expanding Synagogue attacks and the targeted murder of Jews, ethnic cleansing of Rohingya Moslems in Burma, and China’s ongoing Moslem repression.

“There is widespread evidence showing that today, Christians constitute by far the most widely persecuted religion,” adds the report. The document did not differentiate between Catholic and Protestant denominations.

Freedom of Religion remains a fundamental right enshrined in the UN’s Universal Declaration of Human Rights in which Article 18 states in part: “Everyone has the right to freedom of thought, conscience, and religion; this right includes freedom to change his religion or belief.”

Middle East
The Report overviews widespread persecution and harassment of Mideast Christians: “The main impact of such genocidal acts against Christians is exodus. Christianity now faces the possibility of being wiped-out in parts of the Middle East where its roots go back furthest. In Syria the Christian population has declined from 1.7 million in 2011 to below 450,000 and in Iraq, Christian numbers have slumped from 1.5 million before 2003 to below 120,000 today.”

British Foreign Secretary Jeremy Hunt warned, “What we have forgotten in that atmosphere of political correctness is actually the Christians that are being persecuted are some of the poorest people on the planet. In the Middle East the population of Christians used to be about 20 per cent, now it’s 5 per cent.”

Three critical factors are contributing to the drastic decline of Mideast Christians: physical attacks on believers and churches by Islamic jihadi forces, persecution by authoritarian regimes, and legislative harassment.

The Report adds, “Incitement to hatred and hate propaganda against Christians in some states, and by state sponsored media and social media, especially in Iran, Iraq and Turkey, have escalated. The governing AK Party in Turkey depicts Christians as a “threat to the stability of the nation. ”

Former Archbishop of Canterbury Lord Carey said western governments have been “strangely and inexplicably reluctant to confront” persecution of Christians in the Middle East.

South Asia
“The growth of militant nationalism has been the key driver of Christian persecution,” the report stresses. Places like Pakistan and Nepal are known for anti-Christian policies.

Africa
Yet, “Some of the most egregious persecution of Christians has taken place in Sub-Saharan Africa… Evidence from across the region points to the systematic violation of the rights of Christians both by state and non-state actors.”

Reports illustrate, “in Nigeria, month after month, on average hundreds of Christians were being killed for reasons to which their faith was integral. An investigation showed that in 2018 far more Christians in Nigeria were killed in violence in which religious faith was a critical factor than anywhere else in the world; Nigeria accounted for 90 percent of the total.” Groups like Boko Haram had “inflicted mass terror on civilians.”

East Asia
“State authoritarianism is a key driver of the persecution of Christians in East Asia, ” the survey cites. Specifically, North Korea remains the most dangerous country in the world for Christians.

“When it comes to China’s own citizens, its communist ideology and nationalistic outlook leads it to suppress the Christian church in a number of ways… In recent years President Xi has sought to control the church.” Equally Beijing’s policies formally persecute the Muslim population in the Xinjiang region.

The insufferable appeasement by many Western governments towards key persecutors such as China, Pakistan, Saudi Arabia and Iran is nothing new. Such policies show not a subtle understanding of the socio/religious situation, but an often condensing contempt for its victims.

Bravo for the courage to say this. It’s time to shatter this stunning silence!

John J. Metzler is a United Nations correspondent covering diplomatic and defense issues. He is the author of Divided Dynamism the Diplomacy of Separated Nations: Germany, Korea, China (2014).

Copyright © 2020. All Rights Reserved Free Press International. Distribution by TribuneServices. Republication rights are for text only.